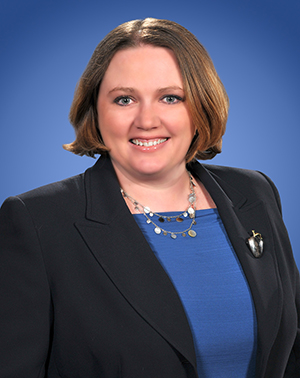 B.A., University of the Pacific

Prior to joining Lozano Smith, Ms. Garcia worked as Special Counsel in the San Francisco area where she represented school districts in due process hearings, expulsion proceedings, special education mediations, and on-site OCR investigations. Her representation has included prevailing on behalf of school district clients as both Petitioner and Respondent before OAH and supporting those cases through successful appeals at the Ninth Circuit. Representative cases on which Ms. Garcia prevailed included issues related to least restrictive environment, the district's right to assess, deaf education, appropriateness of IEP goals, appropriateness of District assessments, behavior support, inclusion, requests for private schools and private services, and the appropriateness of related services offered including ABA, speech therapy, occupational therapy, and assistive technology support.

Ms. Garcia has presented at the ACSA Special Education Symposium on a variety of topics including Deaf Education, Serving Students in the Least Restrictive Environment, and Language Access. Additionally, she was the keynote speaker for the first ever Stanislaus County Autism Conference. She presents annually at Lozano Smith's Special Education Legal Consortium and regularly for districts and SELPAs.

June 2019Number 30Confirming a point which seems to make good sense, the Ninth Circuit Court of Appeals has held that school officials may discipline students for the student's off-campus expression, where the expression constitutes a credible, identifiable threat to others in the school community, even if the student did not intend to communicate such speech to any third party.BackgroundIn McNeil v. Sherwood School District 88J, the personal journal of a sophomore high school student, CLM, w...

January 2019Number 3Governor Jerry Brown recently signed a pair of laws related to granting honorary or retroactive high school diplomas for particular groups of students. Assembly Bill (AB) 2109 authorizes the granting of honorary diplomas to students who are terminally ill and, AB 3022 authorizes the retroactive granting of high school diplomas to students who have departed California against their will.AB 2109: Diplomas for Terminally Ill Students Existing law allows the granting of honora...

December 2018Number 91Beginning January 1, 2019, significant amendments to the Education Code provide pregnant and parenting pupils with new rights and accommodations designed to afford them the opportunity to succeed while protecting their health and the health of their children.In 2015, over 24,000 children were born to individuals between the ages of 15 and 19 in California. Fewer than 4 in 10 young mothers graduate from high school by the age of 18, and 70 percent of young parents nationw...

May 2018Number 18A new law permits students enrolled in juvenile court schools to voluntarily defer or decline the issuance of a diploma for meeting state graduation requirements so that the student may take additional coursework at the juvenile court school or, once released, at a school operated by a local educational agency (LEA). Assembly Bill (AB) 1124, which went into effect on January 1, amended Education Code section 48645.3 and added Education Code section 48645.7.Prior law required ...

March 2018 Number 13 On October 15, 2017, Governor Jerry Brown signed Senate Bill (SB) 179, known as the "Gender Recognition Act," which adds a "nonbinary" gender option to state driver's licenses, identification cards, and birth certificates. Most of this bill's provisions are set to take effect on September 1, 2018, including a provision allowing an individual to petition a California court to recognize their gender as nonbinary, which would then allow them to subsequently request a new...

December 2017 Number 87 A federal district court has ruled that schools may discipline students for "liking" offensive, targeted social media posts. In Shen v. Albany Unified School District, a Northern California district court concluded that a school could discipline students for liking or for writing approving comments on racist and offensive social media posts targeted at other students, even if the posts were created off campus. However, the court also ruled that the school's addi...

In a wide ranging discussion on a sensitive and challenging topic, Devon Lincoln discusses the law regarding the use of restraints in school with special education attorneys Sarah Garcia and Roxana Khan. The attorneys discuss real world experiences, the law that applies in this area, and how staff and administrators can best approach these difficult issues.